Photo: Fire is a chemical reaction that needs activation energy to start it off, provided by something like a match, the heat of the sun, or an overheating machine.

Ask most people what a fire is and they’ll tell you it’s something frightening and destructive involving flames. But to a scientist, a fire is something much more precise. A fire is actually a chemical reaction called combustion. When combustion happens, substances like wood, paper, oil, or coal (all of which are made from chemicals, even if you don’t immediately think of them that way) combine with oxygen in the air to produce water, carbon dioxide, waste gases—and an awful lot of heat. Combustion doesn’t normally happen all by itself: things don’t burst into flames without help. It usually takes some activation energy (provided by a spark or a match) to kick off the reaction. Once combustion is underway, the fire seems to continue all by itself.

Photo: You need to to take away one or more of heat, air (oxygen), or fuel to break the triangle and put the fire.

That’s not quite true. Fire happens when three things are in the same place at the same time:

A fire can burn when all these things are present; it will stop when at least one of them is removed. As any fire-fighter will tell you, putting out a fire involves breaking the fire triangle—which means removing either the fuel, the heat, or the oxygen. Suppose a fire breaks out in a pan on top of your cooker, the first thing you normally do is switch off the heat. If that doesn’t work, you might soak a towel with water and place it very carefully over the pan (or, better still, use a fire blanket). The towel is designed to block off the supply of oxygen to the fire (the water stops the towel from catching fire and making things worse). Every fire-fighting technique you can think of involves removing heat, oxygen, or fuel—sometimes more than one of those things at the same time. Fire extinguishers work by removing heat, air, or both. 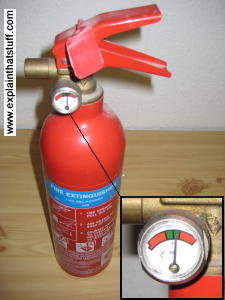 Photo: Some extinguishers have pressure gauges on top so you can check they’re correctly pressurized and safe to operate. If the pressure is either too high or too low, the needle moves into the upper or lower red zone. On this dry-powder extinguisher, the needle is right in the middle: still safely in the green zone, pressurized to about 14 times atmospheric pressure (the normal pressure of the air around us).

There are three main types of extinguisher and they work in slightly different ways:

That classifies extinguishers by what they contain. You’ll also find fire extinguishers classified by the types of fires you can use them on. This gives us five different kinds:

It’s important always to use the right extinguisher for the fire. Using the wrong extinguisher can put your life in danger and make the fire worse. For example, you must never use water extinguishers on electrical fires because you could electrocute yourself and the people nearby. If you’re in the slightest doubt about tackling a fire, leave it alone and get yourself to safety.